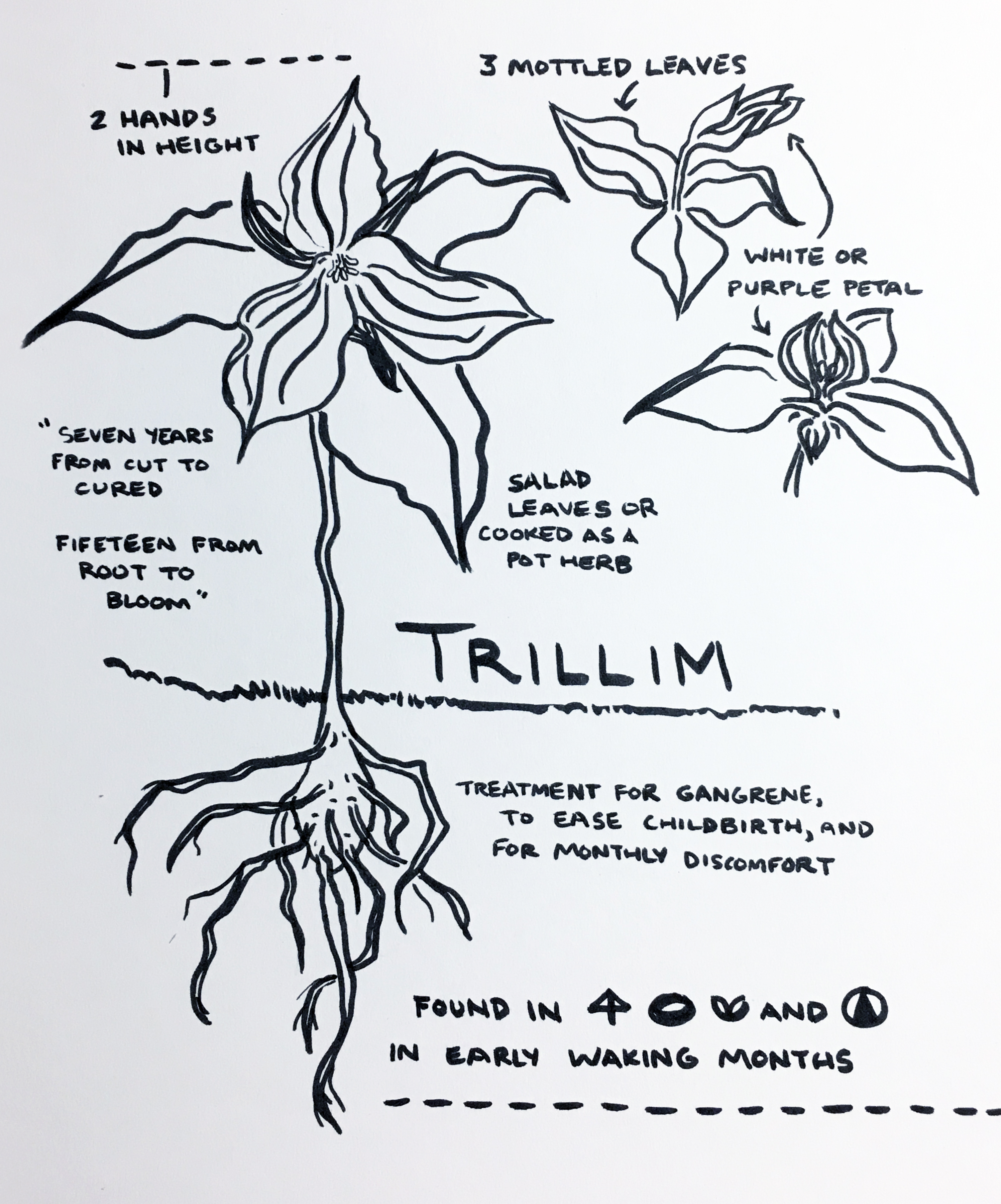 The Path flows out of the township, heading up towards a high ridge overlooking the little valley. Most of the pilgrims are heading that way, though a few mill in the parade grounds or just outside the gates, already scratching notes or trying to buy one last piece of gear that caught their eye from the many vendors camped just outside the city gates. Most of what’s for sale just looks like junk, honestly: food items that (while smelling delicious now) would quickly spoil if left uneaten, or items whose sellers claim are empowerments but whose glimmer, on second glance, looks more brassy than magical. You bypass most of the crowd and avoid anyone hawking wares, and the choice lets you move towards the middle of the crowd.

There are a few who are taking the lead, quickly disappearing up the Path…but you also applaud yourself for your decision not to rush the first leg of the trip. You’re eager to start writing, just like anyone else…but you know from your research that the first day isn’t a very long walk, and you should have plenty of daylight left by the time you reach the first rest. Conversely, the Process Way as a whole is a very long road, and you think you’ll get more from taking your time to truly absorb the scenery. Being fully present to observe your journey will better inform your writing when you do stop later…and, you think to yourself, you’ll probably get less blisters along the way!

You’re still pretty acutely aware though, that you’ve got a lot to learn. It probably wouldn’t hurt to seek out some advice, and you look around to see if anyone else seems like they’ve got any tips to share for the road. Though the pack has thinned a little as everyone adjusts to their own pace, there’s still a few others within easy distance of you. Some, like yourself, look fairly new to the Path: their gear looks brand new, as unweathered as their faces, and though most of the pilgrims are Walkingfolk, there does seem to be a single Birdfolken a few paces back. It’s rare to see a Birdfolken on the road, and the Wazhinkakeh looks especially eager to talk to someone, but you’re not sure that you’d really have much to add…or, you assume, much to learn, either. The Birdfolken looks pretty unprepared at first glance.

Ahead of you, though, appears to be a veteran. Her pace is steady but comfortable, and you take a long look at how she’s arranged her pack, learning a few things just from observing. She carries a forester’s Barker Blade, the strong shaft serving as a walking stick, and she even has a secondary pole attached to her pack, belled, with a small flag denoting her status as a pilgrim. You take notes: she probably uses it to judge the depths of overgrowth, or perhaps to help signal for help should she fall? Her haa cloth is strategically wrapped, the fabric providing cushion for the weight of her pack while still allowing cooling breezes to vent the heat (which you’re growing to realize is quickly generated by the walk). She looks like a promising conversation!

It’s hard to tell in the dawning light, but the wrappings around her forearms and calves appear to be white, not the striking bright blue you sometimes see: so, she’s under an oath of partial silence, but you can tell the scarf she wears is pulled down around her neck, not fixed up around her mouth and face. It’s a symbol that she’s willing to talk…or at least, that she isn’t so opposed to conversation that she’d cover her face even in the effort of walking.  Of course, she might pull it up as soon as you get close…but it’s a risk you’ll have to take if you want to talk to her! Feeling bold, you pick up the pace, trying to look casual and friendly even as you’re obviously moving faster.

…Maybe it’s just you, unused to the steep climb of the ridge leading  away from town…but does it seem like she walks a little faster? No, you’re probably imagining it; it’s surely just the climb. You step up, covering more ground…but when you lift your eyes to the trail ahead, it’s obvious she’s lengthened her strides, as well! The trail narrows here, so maybe she’s just keeping ahead of you so you both won’t have to block the path, which still clogs at points as the occasional Guardian heads in the opposite direction back to the township. Yeah, that’s probably it; she’s just avoiding a bottleneck. Your brow knits with effort (as do your thigh muscles) as you speed up again, but you’re committed to catching up to her!

This time when her stride quickens, you know it’s on purpose.  And honestly, any attempt to appear casual is gone now, as you heave gulpfuls of the cold air trying to keep up. Despite her age, the traveler isn’t even fazed by the fast clip! Just as your vision starts to swim, you drop back. This isn’t going to work. There’s no sense in hurting yourself before you’ve even left the ridge! Frustrated, you halt, slumping against a tree to relieve the weight of your pack and catch your breath.

The moment you stop though, the woman whirls around to face you. Her stance is wide and imposing, and you realize she’d known you were trying to reach her the whole time…and she waited to run you out of breath before stopping. How wise!

She jabs her chin at you, the motion birdlike. “What,” her tone is gruff and combative, carrying over with a question of her own before you can ask yours: “D’you think an Eld can’t make The Way or something? Go on then, I’ve heard it all before.”

“I…uh, no…um, that’s not it,” you stammer between quick gulps of air, trying to defuse the situation. “It’s – I’ve just never–“

“–figured out how to proper say Hawe’, then, ‘fore staring down a one? What have you, the manners of fleas?” ….This isn’t going as you’d planned.

“No, I–” you pause, shaking your head, hands lifting in Signal, signing for wait, while your lungs refill. Your use of hand language gives her pause, at least long enough for you to speak again. “…You just look like you know what you’re doing. And I…” – and it pains you to admit this, even to yourself…but you take the risk anyway. “–I, I don’t. Not really.” This time, when you stop to breathe, she doesn’t fill the gap with words. “I’ve never walked The Path before.”

A greyed eyebrow lifts, and there’s the smallest edge of a smile on those narrow lips. “…No news I didn’t know,” she replies, making a show of looking you over. The smile opens fully now, and despite being a little embarrassed, you relax a little. “Though,” she adds, nodding to your gear, “you obviously did your reading, ‘least. Better’n most of the ‘Brazen Blazen’.”

She extends a hand to you, the fingertips rough as they tap yours in greeting. “I’m Okihka.” The word, in Tongue, means ‘to help another,’ and you take it as a good sign, bolstered when her braka is firm but not nearly as aggressive as her tone had been. You do your best to give braka with a similar show of courtesy, and introduce yourself.

The heel of a good boot turns, and she moves forward, and you jolt forward also, ready to try to catch up again! But, this time when she walks ahead, her pace welcomes yours.

She’s a little more talkative now, asking you why you’re out here. You explain a bit about yourself, and share just a little of the framework of your story (at least the one you hope to tell), since that desire to write is a theme all pilgrims share. She nods thoughtfully, giving you space to talk, and the more balanced nature of the conversation makes you feel comfortable asking about her, now.

Okihka explains she used to be a Ranger, stationed in the far solitude of The Dust; you nod, as suddenly so many parts of her personality and sense of readiness fall into place. Rather than talk about her story, however, she speaks mostly of her service, describing the landscape of the Empty Quarter and how the dunes stretched endless to the sun, like a desert cat stretched out to hold down the sunlight on the rocks. For a moment, her expression is far away. “Desert there…people think it’s empty, but…the desert catches for you if you care for it.” Her eyes snap back to the present, looking ruefully at the greenery around you. “This, this is the real ‘desert’,” she says. “Don’t think it won’t swallow you given  half the chance.”

Maybe Okihka knows the desert, but…a sweeping look around casts doubt on her statement. As the two of you walk, the forest is rich around you: the path is bordered by the lush, three flowered greens you recognize as edible spring trillims, their roots sacred medicine to fight gangrene and moon cramps; the forest floor bristles with groves of verdant shoots of the fast-growing ahnyun, the aromatic vegetable jokingly said to “precede the traveler;” the woods just outside the border trees are thick with brambles, their branches soon to fruit as the weather warms; and the forest itself is full of crababbles and nut trees among the thick pines, whose harvest would drop in the cooler months ahead. It’s a veritable feast!

Okihka is sharp: she catches your moment of disbelief, meeting it with a dry, clicking cough – “keh keh keh!” – you recognize as mimicking Birdfolk laughter. A weathered hand sweeps in a wide arc to encompass the fertile land. “It looks green, yeh?” A shake of the head. “Not green: grown.” Her head shakes again, fingers stabbing out the different plants. “Mebbe I never served in the North, but I know farmlines when I see one. These bounties? They all cultivated goods, set up by Guardians.” She motions again, gesturing past them to the shadowed canopy beyond. You note uneasily how the forest darkens once the clearing of the path is past, how you don’t see much beyond the thick of trees and the bulk of worn stone sheers. “Leave the path? Lose the fruits. Lose the brambles, they that keep the fauna at bay.” She shakes her head again, and this time it’s a look of disapproval whose disagreement goes deeper than your conversation. “It is an illusion of safety that they plant for you. The road holds many dangers.”

The dark eyes look away from yours, turning back to the path. Okihka falls silent, letting the sound of the path fill the conversation instead with the small rattles of bells and the louder phrases of the wind.  As she moves a few paces before you, she seems serious, and a little lost in thought.

…Break the silence, and ask her to explain more of what she means?

…Stay silent and let her think, knowing she’ll speak up when she’s ready?

…Use the break in the conversation to thank her for her time and move ahead?

…Use the break to thank her for her time, so you can slow your pace and fall back?

To place your vote for the next move, visit www.heretherebe.com/path-currentmove and participate in the poll before the end of April.

“On The Path” is a sidequest set within the world of The Inbound Lands, a transmedia narrative universe. Created by M Kelley of studiomnivorous.com, The Inbound Lands has been growing and expanding since 2008.